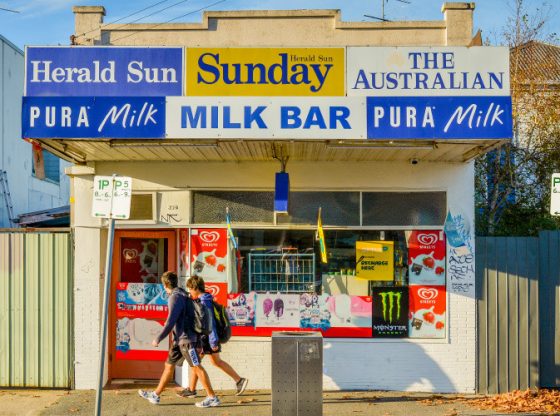 When I launched this site in 2012 I also launched another side project that I had been working on as a hobby for about a decade, the Milk Bars Project. I self-published a small 100-page softcover book of a selection of photographs from the archive titled Milkbar: A Photographic Archive Vol 1.

‘Milkbar: A Photographic Archive Vol1.’ Self-published in 2012 with the launch of The Island Continent.

The book featured photographs of Milk Bars and signage taken throughout Geelong, Melbourne, and regional Victoria.

The Milk Bars Project started one day about 10 years or so ago when I was getting all nostalgic for my 1980s childhood growing up in East Geelong, Victoria. We lived in a small Victorian weatherboard cottage on the main road, McKillop Street, surrounded by old neighbors with blue rinses, concrete stalks, tyre swans, incredible veggie patches, and back lanes. It was a golden childhood.

In 1990 we moved to the other side of town and built a house on a block of land and this new development area was without Milk Bars and old neighbors and history. I was born in 1981 so this time in East Geelong was my 1980s childhood. When I was looking back at this time and started the collection featured here on the site, I took a trip back to my childhood suburb. To walk down that footpath, peek through the picket fence and walk down the back lane.

Mum, Cousins, and me on the right sipping a Fanta in a long-gone Geelong city Milk Bar on Ryrie Street possibly in the old Sale Yards Building, 1985 – 87. Photo credit: Malcolm Donnelly

One of the strongest memories I have of my childhood were visits to the corner Milk Bar. Owned by Dave and Peggy, we simply called it ‘Dave’s’. Riding down the lane to the corner to buy 1 and 2 cent mixed lollies, a milkshake, a sausage roll, or an ice cream was heaven.

Mum even worked for the new owners in the late 1980s when Dave and Peggy sold up and opened a Take Away in North Geelong called the Nose Bag (named after the feed-bags horses wear) Sadly, I discovered ‘Dave’s’ my old childhood Corner Milk Bar had long closed sometime in the early 2000s and only a rusted old tin sign for The Sun newspaper remained on the awning.

For prosperity and childhood nostalgia, armed with a low-pixel digital camera I took a photograph of the building, which sparked my interest in the other Milk Bars that we walked to from home. Were they still there? To my disappointment they were also closed, many with no traces of the shop to be seen except for a personal memory.

This made me realize that something had happened within our suburban landscape. The Australian Milk Bar was quietly fading away without anyone noticing, an Australian icon was disappearing like an ice cream melting in the hot summer sun. I had still visited Milk Bars over the years but hadn’t really noticed a change until that day. I had always imagined Dave’s would still be there.

Gavin standing proudly behind the counter in my childhood Milk Bar in East Geelong, circa 1988-1990. Originally owned by David & Peggy Hawking.

So I began a photo archive of Milk Bars, Mixed Businesses, and Corner Stores. Trying to preserve something that I loved. I came to the realization as an artist the Milk Bar represented an Australian culture that was disappearing. The Milk Bar was the physical manifestation of the cultural themes I had been exploring in my work, the Australian vernacular of the 1980s and prior.

So the project to capture these fading stores began with that fateful trip to my closed childhood Milk Bar a decade ago. Since then I have been archiving the signage, the fading paint on the awnings, the decaying facades of the buildings, and now the cultures and families that dwell within them. The result is a compelling visual diary of suburban Australia, of the family business, the migrant story, of a landscape that is changing with so much rich history.

When I launched The Island Continent, it gave me a platform to share my Milk Bar archive. The posts became the most visited pages and along with the self-published book of the photographs, people really resonated with this nostalgia from their childhood.

I have spoken about Milk Bars on ABC Radio in Melbourne, 3AW with Bruce Mansfield and Philip Brady, 2SER in Sydney, interviewed about the project for The Age, Daily Telegraph, The Australian and The Weekly Review, Channel 31. This was incredible and unexpected.

After the success of the first book, I had planned to self-publish 2 further volumes of my photography, but following the overwhelming public response, I abandoned these humble plans for something bigger. I wanted to compile these incredible micro-histories, connections I had made, and tell the story of the Milk Bar.

So I put out a call in January 2013 for contributions to the project, stories, photos, memories of past and present Milk Bar owners and since then I have been in contact with a dozen families who have generously shared their memories and old family photographs.

In 2014 I began to look outside of my home state Victoria and traveled to NSW up the Hume Highway, stopping off at all of the small regional towns on the trip to Sydney where I explored the suburbs, shooting more Milk Bars, and speaking to more owners. The photographs were featured last year on 500 banners across Sydney for last year’s Art & About Festival and the stories and connections continued.

As part of the festival I spoke at a panel discussing Milk Bars at Sydney’s Customs House Library and Channel 9’s The Today Show featured the photography and the project, inviting viewers to share their old photographs and memories of Milk Bar. Their post on Facebook that day received 2,600 likes and 700 comments from viewers sharing their Milk bar memories and photographs, which they also featured on the show that morning.

From that first shot of Dave’s around a decade or so ago, the project has grown over the past 13 years to an archive of around 300+ shops with thousands of images of signage, faded awning, stickers, decals, and interiors. And after being interviewed in a press article about the project, the greatest thing happened.

The daughter of my childhood Milk Bar Dave’s got in touch after I mentioned my memories of their store and her parents Dave and Peggy Hawking, the store, I found out, was actually called Hawking’s Corner Store!

This was a very special and incredible connection to make from a small personal photo project and it could never have been made if not for The Island Continent. I feel it has come full circle. It had taken me back to the 1980s and my childhood. In East Geelong on those Saturdays riding up to the Milk Bar.

The Age, 27th October 2012. This is the first article about the Book and Project where I mentioned my childhood Milk Bar ‘Dave’s. Dave and Peggy Hawking’s Daughter Jenny got in contact shortly after.

The Daily Telegraph, September 23, 2014. In the iconic Rio Milk Bar in Summer Hill. Sadly George the owner passed away this May. He was a gorgeous man who patiently let me photograph his store in the Winter of 2014 after a Chocolate Milk Shake. Then he let the Tele take this pic for the article in September. He was my favorite Milk Bar owner.

The Weekly Review, 2015. Pic in front of one of my favorite Milk Bar windows in Melbourne, St Kilda.

So, what is happening now? The book is still in the works, I am still photographing Milk Bars, talking to owners, gathering memories, and potentially an exhibition to launch the book. If you would like to be a part of the project, please get in touch as I would love to hear from you! And use this post as a place to share your memories for the project in the comments section below! I will gather these memories for the book and project.

If you would like to be included in this project, either by sharing your memories of visiting your own local Milk Bar or contribute stories if you did or currently run a Milk Bar, please add your memories and stories in the comments below.

If you have family photographs from running a Milk Bar (both interior and exterior) and would like to include these with your memories and stories for the book/exhibition and project archive, you can email me directly at info@islandcontinent.com.au

What to Pack When Travelling During a Pandemic?
Travel to dream about for 2021